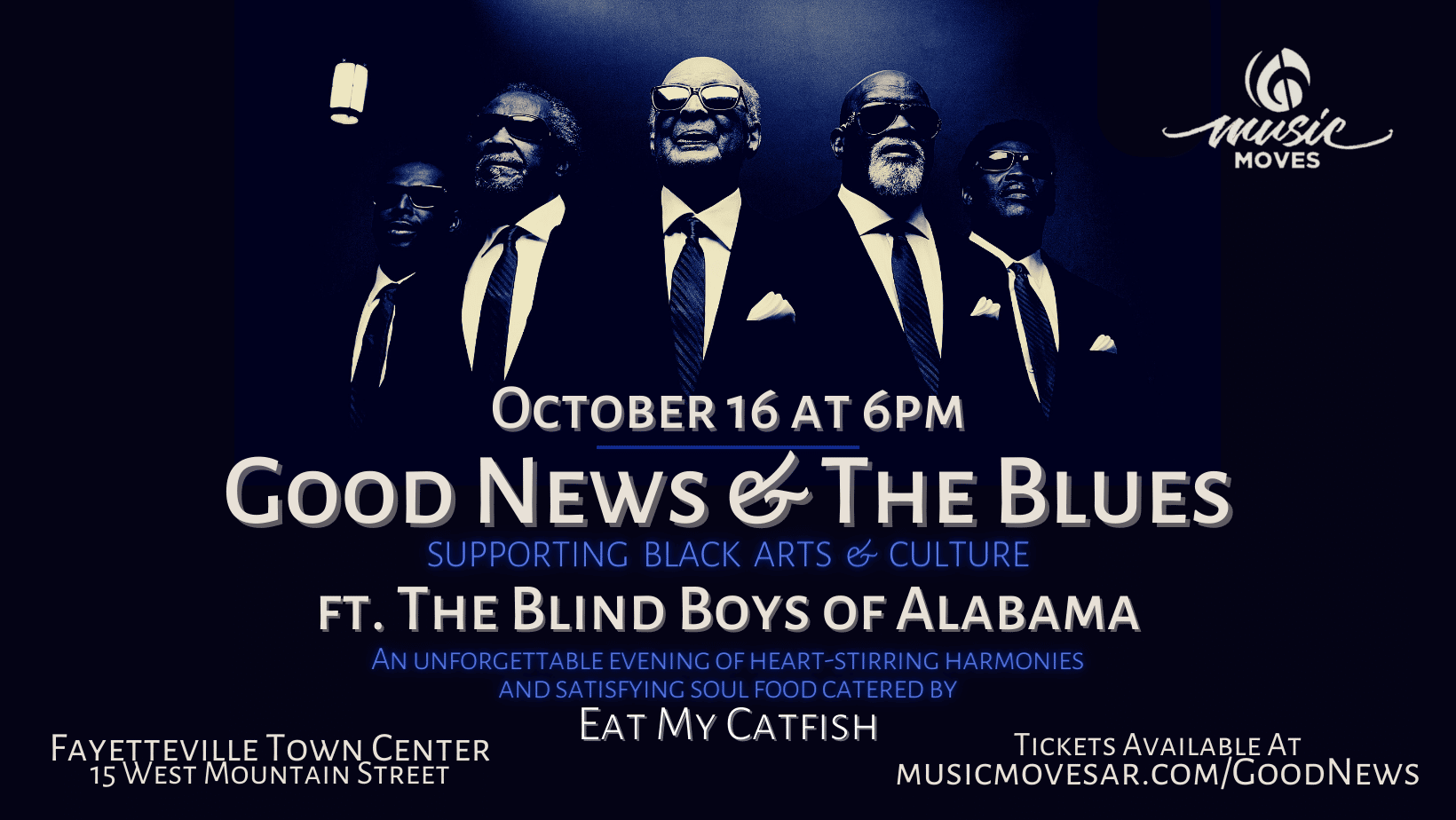 Music Moves invites the NWA community to support Black arts & culture at Good News & The Blues from 6pm-9pm on October 16, 2022 at Fayetteville Town Center. Featuring a powerful live musical performance by the Blind Boys of Alabama and a catered meal showcasing Southern cuisine provided by Eat My Catfish, Good News & The Blues is a fundraising event that celebrates two of the most influential genres of Black music – Gospel and Blues – during an evening that feeds souls and fills bellies, all for a good cause.

Music Moves is focused on widening the spotlight to include historically underrepresented artists and musicians, with a goal of starting conversations that lead to an appreciation of different cultures. Good News & The Blues provides a unique opportunity for donors to support the important work of honoring Black voices and contributions in Northwest Arkansas; donations received at this event will fund future Music Moves educational programs and performances.

Good News & The Blues featured artists the Blind Boys of Alabama are recognized worldwide as living legends of Gospel music. Celebrated by The National Endowment for the Arts (NEA) and The Recording Academy/GRAMMYs with Lifetime Achievement Awards, inducted into the Gospel Music Hall of Fame, and winners of five GRAMMY® Awards, they have attained the highest levels of achievement in a career that spans over 70 years. The Blind Boys are known for crossing multiple musical boundaries with their remarkable interpretations of everything from traditional Gospel favorites to contemporary spiritual material by songwriters such as Eric Clapton, Prince and Tom Waits. They have appeared on recordings with many artists, including Lou Reed, Peter Gabriel, Bonnie Raitt, Willie Nelson, Aaron Neville, Susan Tedeschi, Ben Harper, Patty Griffin and Taj Mahal with career that has both defined the sound of the American South and pushed it forward from the 20th century into the 21st.

Good News & The Blues will be hosted by Helena Gadison and Randy Coleman. Doors open at 5pm; tickets available at https://www.musicmovesar.com/goodnews/ For information about purchasing tables, please contact [email protected].

Music Moves is a nonprofit organization whose mission is to make Black music and the arts accessible both to students and to our entire community through performance and education. We take care to shine the spotlight on the importance of starting young when educating folks about the pioneers who paved the way for justice and equality for all. We believe that music is key to opening pathways of communication across cultural boundaries and we take every opportunity to get out in the community and get people moving with us!
Tickets